With the existing border of roses to the east of the garden having been refreshed and the west border in the garden being set down to roses, we are delighted that we are now experiencing these two borders in their full glory, a profusion of flower and scent are now filling the garden, and make reference to the double border where the beds are also containing a number of older Rose varieties.

Why not pop along while on a walk around the Thornham Estate. The Walled Garden is open from 10-2.30pm weekdays, as well as looking at the newly refreshed borders, the new wild flower area and inspecting our collection of apple and other fruiting trees, you can enjoy a cup of tea and slice of cake for a very reasonable cost, whole supporting Beyond the Wall in continuing the work that we do to support adults in learning new skills and gaining greater independence.

A little over six weeks ago we were approached by the organisers of the flower and garden show section of the Suffolk Show, asking if we would like to produce a show garden. With this looking like a great opportunity to show the public what we do within the walled garden, and that it also coincided with the week where we were opening the garden to the public for the first time in many years, we were up for the challenge.

With Phill and Angie co-ordinating ideas, a plan was formed, to show the various elements of what we do and grow at Beyond the Wall, but also to answer a simple question; Is it possible to create a small, pretty and relaxing garden without spending a penny? Our garden ‘#gardeningsetsyoufree’ was born!

The hunt was on for materials and plants, our clients and volunteers stepped up to the challenge, taking cuttings, watering, potting and caring for existing plants. We also put out the word for donations of plants, to which we had an amazing response, with plants turning up form many of the connection that we have fostered as a team over the last 9 months.

With three days of everyone being involved in transportation and set up of the garden at the showground passing (all of which were enormous fun) the show days arrived. Phill and Angie arrived in Victorian attire, to form another living part to the garden.

With great weather, there was plenty of interest in what we had put together, with people enjoying the various elements of the garden and stories of how it was put together, the garden was even thought to have been put together by a plant nursery by a couple of people viewing it. The greatest compliment of all however was that mid-morning on the first day of the show, we were informed that the garden has won Silver Guilt in the Show Garden competition, not a bad reward for our first Show garden, and great to help us promote the walled garden being open, so people can come and enjoy, more of what we do well. 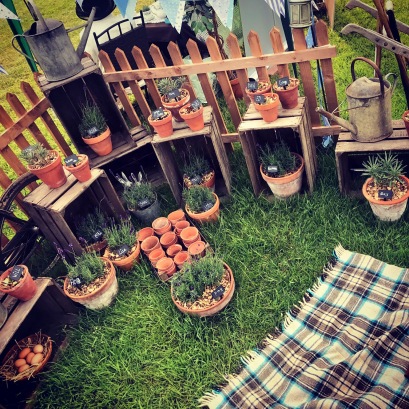 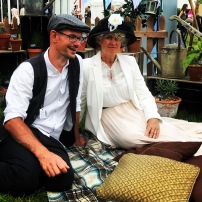